Fields of Cane and Cains 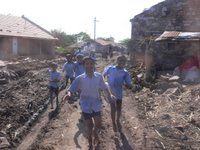 …Cain and his offering didn’t get approval…” Genesis 4:5

It was going to be a busy day. We had three villages to cover and the distance, road conditions, and unsure tires made for great anticipation and adventure.

We got started after lung and after driving through countless acres of sugar cane arrived at the first location within 2 hours. Due to the rainstorm the previous night the dirt roads were heavily rutted and not easily traversed. The first thing the driver looks for is a place where he can negotiate to turn the can around without turning it over or winding up in a ditch. The eight missionaries traveling with us unloaded the sound system and indicated for us to follow. We carefully stepped on the pathways unsure what was mud and what were remnants of animals that had gone before us.

I was surprised that our location was the village Hindu temple! We took our placed under the paintings and statues of the local gods and we proclaimed the One true God.

It reminded me of the time Jesus stood at the temple in Caesarea Philippi and told Peter “you are Peter and on this rock I will build by church and the gates of Hell will not prevail against it (Matthew 16:18) I stood at that same location almost 2000 years later and saw the ruins of the pagan temple that truly did not stand against the Truth, the Way and the Life. 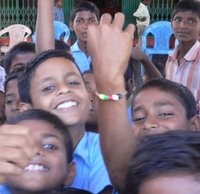 "We demolish arguments and every pretension that sets itself up against the knowledge of God." 2 Corinthians 10:5

The crowd gathered and hundreds of children filled the temple and sat eagerly in front of us. Many of them were wearing their gospel bracelets and proudly showed them off. The hope of the community in the simplicity of a few beads.

We had time after the program to pray for the people almost all of them came forward for a blessing. We prayed for the demonic forces to be broken in a temple filled with them. When prayer time was over we were walked through the village to the believer’s house to enjoy chai and biscuits. Our first stop was one of the elders of the village. We entered the low doorway and found ourselves in the stall with a cow and chicken. An elevated area held the bed and chairs we were to occupy. There was an old woman with leg problems lying on the bed. After our tea and biscuits we prayed for her and blessed the house. We crossed the mud roads trying to avoid the cattle, goats and mud. 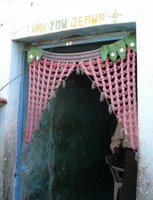 Over the next doorway, we noticed the words in English “Thank You Jesus”. Written at great risk but proudly displayed. Here we had sugar cane milk and again prayed blessings for the household. The husband and wife knelt for blessing and the harvest of their “field”

We loaded up the van, waved goodbye to the crowd and we were chased down the road by the happy children.

Back on the road through the cane fields to our next outreach. Down the one lane road I was surprised at how much traffic was on the road – human, animal and vehicle – all vying for room and right of way. As we approached the village, harvested corn was piled high waiting to be shucked and ground into flour.

The corn here is a deep orange color not far from “saffron”. I had to think to myself the harvest here is not white but the beautiful multi-shades of the native people. 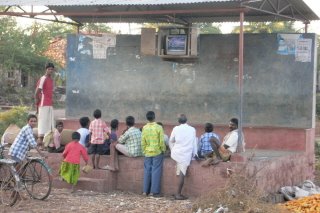 The sun was beginning to set and we had time to see the people and be “seen”. Under a concrete shed, a television had been set up by the government; children were watching wrestling – courtesy of USA-ESPN. It didn’t take long before they saw we were more interesting than the television after all we were “live.”

The missionaries started singing their praise choruses and the children followed quickly along. The elders of the village soon began to gather around the outskirts of the crowd. One of the elders began yelling and shouting. Some men in our team quickly surrounded him to calm him down.

As I looked over the gathered crowd, enjoying, listening, and ready to hear what we had to say. I saw harvest. 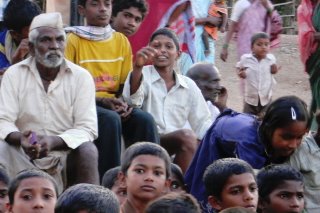 The old man stood behind a pile of corn – his harvest and he was desperately trying to stop the Lord’s. He was finally convinced to leave and the program continued without interruption. Once again, when our time came to leave – we left behind many who had responded to the call to believe in Jesus.

“Some fell on good earth, and produced a harvest beyond his wildest dreams. Are you listening to this? Really listening?” Matthew 13:8-9

By the time we reached our last stop for the evening it was dark. But the vehicle approaching still was cause to draw a crowd – even in the dark people came to hear what was happening in the light and to see who was speaking about the Light!