Save the Best for Last 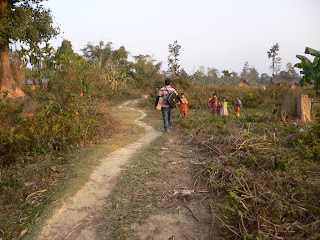 Our last day in Lakla brought one last stop. L explained we would need to leave earlier for it was farther away than we had been. Confusing, taking into consideration we felt like we had already reached "the ends of the earth" we saw the "end" was even farther (and rockier) than expected.

We set off down the usual road taking us from the school into the main town of Jagun. Once again we turned off the road onto a dirt path that cuts through several villages. We passed by one of the schools where our performance was on Wednesday - but we kept going, and going, and going.

Yesterday, our interpreter returned on his motorcycle with his pants legs wet up to his knees. He laughed and said he had to see how deep the river was before we went to the village. We really didn't understand the humor behind his statement, but he was laughing and so we laughed (mostly out of politeness).

It was not until we reached the river we understood. The only bridge was bamboo and built for bicycles not cars. He crossed the water to see if it would be too deep for the car to ford the rushing water without stalling out! We were definitely in for an adventure. My thoughts went from "how did they ever find this place" to "what happens if the car breaks down?" We passed few houses (although some of those did have DishTV, no gas stations, but thousands of acres of tea plantations.

Our backsides and our sore backs kept us from breaking out into the song, "over the river and through the woods". We were hanging on for dear life and wondering when the car trip turned simulated horseback trail would end.

After 45 minutes of bumping, grinding, gripping, and praying - we arrived at a beautiful clearing, surrounded by tea bushes as far as the eye could see. A small one room mud school house stood against the breathtaking backdrop with a few children already seated on the benches waiting.

L spoke to the headmaster and was informed more children were coming. He suggested we visit the church in the meantime. One of our team members laughed and said "get ready for the horse ride". MORE!!

We all got back in the Jeep (stallion) and headed deeper into the tea that has yet to make it into a cup.

"Horse ride" was an understatement - rather "roller coaster log ride" would have more accurately described the rocking from side to side, or the grass path cut through the over growth that was hardly wide enough for a human much less a "horse-powered" vehicle. The brambles were certainly leaving their mark on the paint job.

As soon as we stopped the car the people of the village came out to see the visitors to the New Kenya Baptist Church. Children carrying babies emerged from thatch houses and eyed us with curiosity. Lipok invited them to come to the program at the school. We thought, "well, it will help the numbers increase from the handful we left."

We loaded back into our motorized equine although a horse would probably carry us in as much comfort. By the time we arrived - not only had more children arrived - it looked like the whole village! And by the time the program was over - even those in the fields had walked the distance to see the curious strangers.

After the program, we began our relay games. All the parents and family members surrounded the lines to cheer their young ones on. If they weren't following instructions (passing a frisbee over your head then under the next one's legs) the mothers were quick to demonstrate and shout their encouragement.

It is hard to describe such a setting.

Deep into the jungle, a clearing for a school house, a field for playing games, against a backdrop of giant Banyan and palms, with the mountains rising in the distance.

The children ran, laughed, tried to figure out why we were excited - but it was all more contagious than the latest strain of the flu! Even the oldest people on the sidelines laughed and delighted in the simple fun of a childhood game.

Although their were "winners" who took first prize of a bar of soap, and the team that came in last received erasers and pencil sharpeners, this day in Lakla - they all had an unforgettable experience.

As we prepared to leave the school master approached our young interpreter. He set off on a long monologue as he surveyed the gathered villagers and the children still running around enjoying their biscuits and looking at each others gospel bracelets. When he finally stopped, he turned to look at us while K(our team member) related what he said.

First, K explained the real headmaster of the school had just died, and his replacement (the man before us) was embarrassed the village had not offered us a proper welcome or given us more suitable gifts for our visit (we each received the traditional red and white scarf of the Assam area). He explained they had never seen or heard such things we shared with them. And then finally he said, "All the people here, the children and our villagers, want you to know this is the best day of their life!"

Tears filled my eyes. What a privilege God saved for our last day in Lakla. What joy awaits us we know He really is saving the "Best" for last.