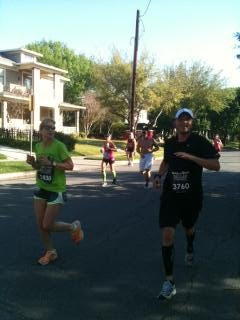 The roads were already closed in advance of the runners. The police standing post just shook their heads as I maneuvered my car past the barricades. I convinced them to let me through indicating my daughter's house was my final destination.

After a night out, she was not answering her telephone, or her door so I parked my car in the driveway and waited for the race to begin and the eventual passing by of my two sons. I set up for my photo opportunity.

Marathons, half-marathons, and the Iron Man competition are the topic of many conversations during dinners at Monday@Mom's. Both my sons are training, but my oldest has taken it to another level by committing to his first full Iron Man competition this summer. The last time I offered dessert after dinner he replied, "I'm watching my weight." WHAT! "You're burning more calories than you can humanly ingest!" I replied. "Yes, but one more pound is one more pound of impact on my knees. One more pound I have to carry."

"...let us throw off everything that hinders..."

You see, my son is VERY aware of every ounce that will be pounding on his feet and his joints for the 17 hours of physical endurance he has signed up for. It has served as a good example to me - not only in the physical realm but the spiritual one as well. Every activity that is not Kingdom focused and advancing IS holding me back in the race He has set before me. The distractions and things of this world are designed to discourage us and get us of course. It is HARD work and commitment that makes triathletes. It is not for the faint of heart. The spiritual race we are set on takes disciple and active participation.

I was also reminded of the mindset and psychological aspect such a race takes, this week as well. My youngest son had has first "open water" training swim in preparation for his first triathalon. His natural athleticism has often irritated his older brother. When we talked about the swimming portion of the training, he said, "It's not that far, it's not that big a deal." But on Monday, he laughed and said, "did you hear how I almost drowned!" Not something a mother wants to hear at dinner. He went on to explain how out in the middle of the lake he panicked realizing he just might not have been as strong a swimmer as he thought. The winds were high that day and kicking up whitecaps across the surface, slapping the swimmers in the face as they were going the distance. His brother and friend had long since out paced him and they figured he would just be okay, just swimming slower. But somewhere halfway through, far from shore, his mind responded to the fatigue in his body and started saying "you're not going to make it." Recounting the story he chuckled, "yeah, I got a little freaked out. What was I going to do? Turn around? Keep going? At one point I just had to make the commitment past the pain in my muscles and go for it."

"These were all commended for their faith, yet none of them received what had been promised." Hebrews 11:39

For the past few weeks, my crafty friends and I have been busy making trophies, hats, platinum record albums, praying hands and various and sundry items to award as prizes for the Wounded Warriors event this coming week. I have often set my glue gun down and just paused to see beyond the veil of the natural and exclaim to my "armed" friends, "Do you realize the cloud of witness that are marveling at what we are making! I bet Michelangelo and Leonardo are wishing they had glue guns back in the day!" To which my friend replied with a burst of laughter, "yeah I bet he is saying, 'I had to lay on my back for that chapel ceiling and THEY get to do the fun stuff!" But alone at night, before I go to sleep, I confess sometimes I listen to the lie and wonder "what the heck am I doing? What is this good for? What am I good for?" I panic in the middle of my lake of uncertainty.

"...When you find yourself flagging in your faith, go over that story again, item by item... THAT will shoot adrenaline into your souls!" Hebrews 12:3 The Message

My son interrupted my writing with his daily phone call. He began with his standard question, "What are you doing?" I replied, "writing about you!" He then went on to tell me he took his younger brother out to "witness" a triathalon this weekend. "I wanted him to see what a race looks like. It's one less thing he has to be nervous about." That's what brothers do, that's what friends do, that's what we as believers need to be doing for each other. For those facing moments of weakness and uncertainty about their upcoming race.

When I was sitting on the sidelines of the marathon I felt overwhelmed by the Spirit. Police were riding alongside the lone Kenyan runner who was WAY out front. "Go, go, go!" I shouted, although I don't think he even heard me his mind was so focused on the finish line. Then, slowly but surely more and more runners began to fill the street. Some, obviously reaching the end of their physical stamina were grateful for the bystanders. All of the sudden, in the distance I saw my son coming down the street, I almost cried. It was partially pride, but it was also the Spirit giving me the inner knowledge of just how many "witnesses" really ARE on the sidelines of heaven cheering us on. The feeling THEY have seeing the pace we are keeping, the hardships, the losses, the financial troubles, and the personal losses we experience. "Run, run, the finish line isn't far!"

"...if they had been thinking of the country they had left, they would have had the opportunity to return. Instead they were longing for a better country-a heavenly one. Therefore God is not ashamed to be called their God..." Hebrews 11:16

Friends, we are each others cheerleaders AND coaches. We can encourage one another to finish the race set before us. We can share what has happened to us so others can find their race easier to run. We can be disciplined in the Word, in fellowship and in prayer that will enable us to endure the physical and spiritual times when we are prone to panic. We can do whatever is needed to cheer up and cheer on, the hurting, the broken, and the discouraged.

Next week we'll be doing our part to encourage the valiant men and women who have served our country. We won't be handing them medals for their service, we will be showering them with the joy of the Lord!

The starting gun is about to be fired. I am fired up and smiling
In His service
Charlynn

Be part of the cheer leading team of Sunshine After Rain Ministries. To donate by credit card online, please visit our website:
www.sunshineafterrain.org