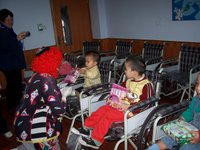 "He has sent me to bind up the broken-hearted"

We left early Sunday morning for Taian in the cold and rain. Winter has definitely arrived in China! We all piled in (a veritable clown car) with the supplies purchased for the orphanage stuffed into every space available between and even under the seats. We arrived safely in an hour and a half to the apartment where we were to wait for the rest of the visitors accompanying us to the orphanage. Once all of our group arrived we set out for the Children's Home.

We were greeted outside by the director and the children followed quickly behind him. They were so happy - hugging me one by one and greeting me with open arms. Many of the children had grown so big! We hussled up the stairs in one huge hugged crowd - for a moment tears filled my eyes - happy to see my friends but sad they are still friends living in an orphanage in China.

Our first stop was the room with the wheelchairs. They had five of the disable children sitting in the chairs waiting for their benefactor. They began waving and smiling at the colorful "clown" and we were happy to see the remembrance of former visits register on their faces.

The director and the coordinator allowed time for many pictures and handing out of gifts of cookies and crackers to the children in the chairs. The director gave a speech of thanks and friendship we have established over the last five years. They handed me a plaque and allowed me to address the gathered media. I expressed gratitude for being allowed to come as well as sharing the gift comes not from one person but from individuals in the United States who know and care for the children. Once the ceremony was over, we went down the hallway to the children in the nursery.

They were in the same conditions as last year. Most, severely disabled or down syndrome - abandoned at birth for a life confined to a 2 1/2' x 4' crib. Some were laid two to a bed because they were so very small.

Their response to touch is astounding - one of the significant things that still brings tears to D's eyes. One child of 11 or 12 (her disability confines her to the crib) was crying - I was able to use my little puppet to turn her wailing into laughing, sadness into joy - with just one touch to her face!

The rest of the children were gathered for the program down the hall and our camera crew and officials lead the way through the darkened corridor. They clapped and smiled with great enthusiasm as CARE EE and her entourage entered. I shared a few new tricks and asked what their favorite story was?

"The one with the Baby Bee" they replied as they made hand gestures and buzzing sounds. I called the director up to act as the "King" and fixed a curly wig and Groucho Marx glasses on his face. The children cackled out loud at the transformation, and participated in each phase of the story - even agreeing at the end on the moral - "everyone can make a difference."

For the first time this year we were taken on a tour of the entire facility which is also a home for the elderly. They were so happy to have visitors and their smiles were infectious as the children's.

Next year will be the 90th anniversary of the orphanage. Started in 1916 by two Assembly of God missionaries. I wondered what they would think of the doors being opened to a missionary in disguise of a clown?
Email Post