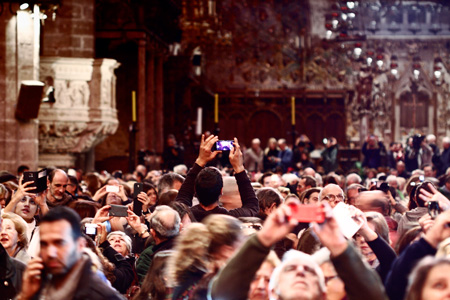 I'm disturbed, and I don't think its the result of being iced and snowed in for almost an entire week.
I was browsing through Facebook posts, looking at all the "snow" week photos, laughing at ridiculous animal videos, and pausing for prayer when I noted a friend's request for sickness or issues. I thank God a lot for Facebook - and it isn't because of all the animal dancing, or even because I can "keep track" of my global friends, or cyber-stalk celebrities whose lives fascinate me.

I thank God for Facebook because it frequently challenges me to consider the way I think about "Friends" and the way I think about all those "others." We are living in an age of technology where a riot in Mumbai, can be seen by a kid in Mayberry in REAL TIME! With the prevalence of cell phone videos and photos, we have unlimited images, from countless angles of whatever the crowd finds captivating.

It can be a singer (Madonna) falling from a stage, or a massive 15 car wreck on the frozen freeway shot from another vehicle navigating through the pile-up. It's a good thing and it's a bad thing, both in so many ways. It gives a lot of people a "voice" that never had one. Geeks and gurus have a platform, that if well manipulated and distributed, can make an idiot turning flips off a child's swing, finance their education through You Tube ads.

"America's Funniest Home Videos" established a cultural norm where it's okay to laugh at grandma setting her hair on fire at the family BBQ, and what the heck - that prize money makes the embarrassment of Uncle Billy's butt crack worth a trip to the stage for our fifteen minutes of fame.
All those 1 minute 45 second snippets of humor come in handy to alleviate the boredom of bad weather days and lonely late nights.

Because of the trillions of images we see, and 140 character messages (Twitter) we read, we become desensitized to the BIG stuff that is REALLY going on in the world. The images of Christians in cages being paraded through streets in a distant land is just that - a distant land, a distant problem, a distant people. And anyway, the next post had that recipe for pound cake I've been meaning to try.
My In-laws were Polish immigrants. My father-in-Law's family had been part of the aristocracy of Europe before the World War II. Their vast estates were confiscated and used as Nazi headquarters as the battalions of German forces marched across borders. His father was considered a threat to the state and imprisoned in Auschwitz. He survived the death camp where over 1 MILLION people were murdered.

My mother-in-law's father and mother were both in concentration camps as well. Her family had a rich legacy of influencing centuries of Polish politics and economy. Their names are recorded in the nation's history books. We often talked about their experiences as teenagers growing up in such extraordinarily turbulent times. I was curious to know how could the European "nations" ignore what was happening to their Jewish neighbors and friends. During one of those conversations, I got an unexpected answer. "Of course we heard "rumors" about these "Nazi's," we assumed they were just common thugs. After all, the Germans were some of the most intellectually sophisticated people in the world. They had hundreds of years of cultural contributions in art, music, and science. Really, it couldn't be that big of an issue. The "rest" of the Germans were okay."

When I asked, "But what about the Jews? What about when they started targeting specific groups?" Again, what I heard from people who LIVED through that time, from people who considered themselves people of faith, smart people, good people, surprised me. "Charlynn, you have to understand, the Jews at that time were the "other" people. Yes, they were our neighbors and our bankers, and kind of our friends. But they had "other" ways. They had communities we didn't belong to, and weren't invited to be a part of. They had odd traditions, even foods we loved (pork) they wouldn't eat. They were strange, and they weren't like us.

And after all, what could a little band of thugs do. Most Germans were nice. If something really bad were happening in their country - all these thousands of "good" people wouldn't let a bunch of miscreants get away with too much!"

Listen, before you start responding with rebuttals or replies, I'm not coming down on the German nationals that were (or were not) part of the Nazi party and Hitler's rise to power. I'm not "picking" a side on the behalf of radicals or religious. I'm looking at Facebook, and the forum. I'm looking at me.
Years ago I watched an Academy Award nominated film, "The Wonderful Horrible Life of Leni Riefenstahl." When I searched for it on YouTube I discovered the last film she made in 2002 at the age of ONE HUNDRED! (http://youtu.be/xjgYS8uXwFk ) "Leni Riefenstahl - The Immoderation of Me." You probably have never heard of the film or the woman. But, her claim to fame isn't in that she is the oldest director in the world, or the oldest diver in the world. Her claim to fame was as Hitler's official Media consultant. In the documentary, the young Jewish filmmakers ask if she felt any remorse for crafting iconic images ("Triumph of the Will" the 1934 Nazi Party Congress in Nuremberg) that would make a band a thugs and their leader a cult of hate inciting a nation to genocide. She didn't. In fact, after relentless questioning in the end she said, "I'm an artist, the propaganda films were art and nothing more. How they changed culture, or history, is not my responsibility." I wonder how the "Arab Spring" and its use of Facebook made Mark Zuckerburg, feel? And now, the social media proficiency of ISIS is effectively spreading their ideology for a Caliphate across the world.

How did a band of thugs change the world in 1933? In part, with the help of the manipulation of the media.

How is a "Junior Varsity" terrorist group recruiting college graduates to BEHEAD and FILM the horror? The same way.

"What has been will be again, what has been done will be done again; there is nothing new under the sun." Ecclesiastes 1:9

It makes me stop "dead in the tracks" of my comfortable Sanctuary after viewing an ISIS video. My Bible is open and Jesus is answering the question of the "religious,"

I thank God for Facebook because at the very least, it does more than entertain me and occupy my time with "Likes, Comments" and "Friends." It reminds me that complacency and disregard is dangerous.

It makes me reflective on a winter day about history, about wars, and about "others."

It inspires me to pray.