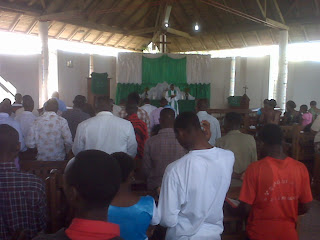 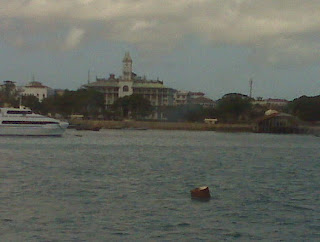 "He got in the boat with His disciples, and went to the region of Dalmanutha." Mark 8:10

It seems that my time in Zanzibar continues to follow a "boat" theme! The few days before our departure, definitely felt like Jesus was "asleep" in the boat during the middle of my storm. And though my spirit and anxiety have at times improved, the "waves" on an ocean of circumstances well beyond our control remain.

Last year I wrote regarding "Dalmanutha" and the fact that while I had read the verses and remember the account of the feeding of the four thousand, the "region of Dalmanutha," never remained in my memory. This morning during the church service the Pastor read the passage in Mark and I felt like I had returned to a familiar neighborhood. "Dalmanutha, nice place to visit, but you have to take a boat to get there."

Zanzibar, nice place to visit, but you have to take a boat to get here.

The sound is exotic, but do you remember why you know of Zanzibar? I thought about Zanzibar like Dalmanutha. What do I know and why exactly do I even know about this small island off the coast of Tanzania? Is it the Bing Crosby and Bob Hope film "Road to Zanzibar" that created the buzz about this distant land? Is it the spice exports they are famous for? I just can't recall, but for certain as we "took a boat" to get here I knew it's a place that needs to know Jesus.

Yesterday we arrived after our brief intermission at the YWCA in Dar es Salaam. We both decided that while it was safe, we were definitely too old for a shared restroom at the end of a long hallway. At breakfast, the canteen was filled with a variety of bohemian-looking youth (dread locks, torn jeans, and tube tops). After our breakfast of bread and mixed-meat weenie we were off for the boat.

Here's our dilemma: two middle-aged very light-skinned women with two hundred pounds in four bags two carry-ons and a back pack trying to negotiate through three hundred very dark-skinned Africans with a few pieces of hand luggage. The porters (who I vehemently warned about touching the above stated two hundred pounds) actually mocked us about trying to get down to the dock. We finally relented and let a porter negotiate through the crowd, load our heavy burdens on the boat and be off!

I was glad we were not on the "slow boat to China," but the fast boat to Zanzibar which still took over two hours across rough seas. "Jesus, are you awake yet? We are going to need some help getting off this boat."

We docked and stood among the crowd who were trying to collect belongings which ranged from new bedspreads and coconuts to the backpacks of a group of bohemians. Reasonable porters appeared and took our bags to the immigration area where we became official entrants into ZANZIBAR!

We were met by the Pastor and after a quick lunch we took a tour of the site of the ancient slave market. A huge stone cathedral now stands where human beings were tortured, beaten and held in chains and auctioned off like livestock. Our guide told us the story of the explorer Stanley Livingstone, who in his search for the source of the Nile stumbled upon the brutality of slavery in Zanzibar. After seeing the atrocities perpetrated here in this land, he left his primary occupation and began a fight to abolish the practice. A crucifix made from the tree he died under is in the church; a golden plaque recorded the following:

"To the glory of God and in memory of Livingstone and other explorer men good and brave, who to advance knowledge set free the slave and hasten Christ's Kingdom in Africa, loved not their lives, even unto death."

Dalmanutha was famous because Jesus was there. One reason Zanzibar is famous - because two thousand years later a follower of Jesus came here and began the process of abolishing the slave trade the area was infamous for - Dr. Livingstone you may presume.

We are here this week to abolish the slavery of false doctrines. Six hundred thousand people live on the island but less than 6,000 claim Christ as King. Today during the church service the loudspeakers from the mosque next door competed with the praise. We were told whenever permission is given to build a church, the locals immediately put a mosque next to it. The loudspeakers may drown out the sound but they cannot drown out the Truth.